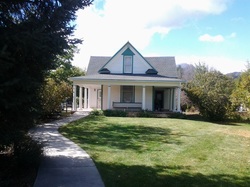 The Stevensville Historical Museum houses exhibits of the history of Stevensville, Montana, which is recognized as the first permanent white settlement in the state of Montana and the traditional homeland of the Salish Indians.
​
​In 1805, the Lewis & Clark Corps of Discovery walked through Stevensville close to what is now Main Street on their journey of discovery through the northwest area of the Louisiana Purchase.  St. Mary’s Mission was established in the Bitterroot Valley in 1841 by Jesuit missionaries who were asked by the Salish Indians to come to the valley.  In 1850, John Owen purchased the site of the St. Mary’s Mission to establish a trading post, Fort Owen, which served the settlers, Indians, and missionaries in the valley.  A settlement of traders and settlers developed around the mission and Fort Owen. The name of the settlement was changed from St. Mary's Village to Stevensville in 1864 to honor Isaac Stevens, the first governor of Washington Territory.  Gov. Isaac Stevens and Lt. John Mullan both visited Fort Owen in the 1850’s while exploring this area for a northern route for a transcontinental railroad.
Powered by